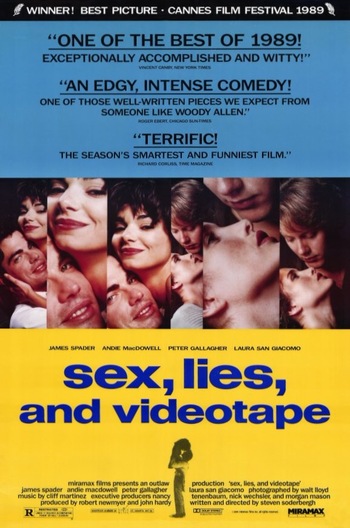 sex, lies, and videotape is a 1989 movie that marked the directorial debut of Steven Soderbergh. It launched the careers of Andie Macdowell and James Spader, but is most notable for revolutionizing the modern indie film industry, putting the Sundance Film Festival and Cannes Film Festival in the public awareness. The screenplay was nominated for an Academy Award.

The movie tells the story of an unhappily married couple, up-and-coming lawyer John (Peter Gallagher) and sweet, sexually repressed Ann (Macdowell). John's having a torrid affair with Ann's sister, extroverted Cynthia (Laura San Giacomo). Matters are complicated with the arrival of Graham (Spader), an old college friend of John's, a mysterious and sensitive man who collects interviews of women about their sexual experiences.