My Sensors Indicate You Want to Tap That 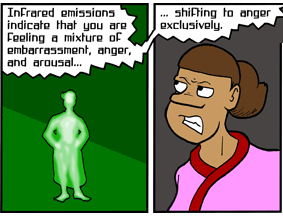 "Hey, I have heat sensors. I know what you were thinking when she gave you that smile..."
— Talking Gadgetmobile, Inspector Gadget

Unresolved Sexual Tension is always fun when played for laughs and amusement. Two characters are totally into each other but it's never acknowledged, just heavily implied. That is, until a character with some form of Super Senses comes into the picture.

See, Super Senses let you see things like body temperature, pheromone levels, or simply a better ability to read body language. What can you infer from those signs? Why, UST of course. This person just proclaimed for all to hear that one character is attracted to the other, or two characters are attracted to each other. This usually causes embarrassment on the part of the other characters and everyone tries to ignore it for the sake of awkwardness. It can be seen as a form of lampshading the UST.

Usually the character announces this innocently, due to not being aware of This Thing You Call Love. Sometimes, though, they're deliberately trying to play The Matchmaker or just amusing themselves at the aroused person's expense.

Of course, it doesn't always have to be UST. Sometimes it's a one-way Love Interest, or just simply sexual attraction because, well, it's what the sensors indicated.

Frequently phrased in Spock Speak. Also, compare Dirty Mind-Reading (for telepathic examples) and Or Are You Just Happy to See Me? (for examples where arousal is readily evident without the need for special senses).

Depending on the situation, can easily be a Moment Killer.