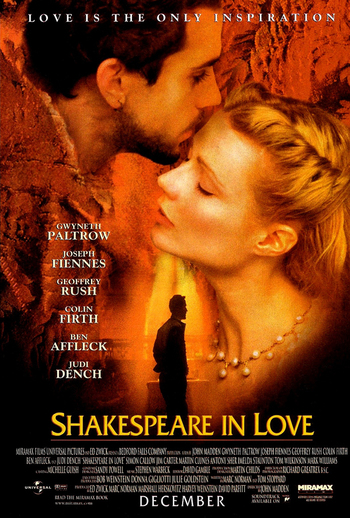 Henslowe: Mr. Fennyman, allow me to explain about the theatre business. The natural condition is one of insurmountable obstacles on the road to imminent disaster.
Fennyman: So what do we do?
Henslowe: Nothing. Strangely enough, it all turns out well.
Fennyman: How?
Henslowe: I don't know. It's a mystery.
Advertisement:

(no, not the one associated with American football), written by Tom Stoppard, and with a packed cast led by Gwyneth Paltrow, Joseph Fiennes, Geoffrey Rush, Colin Firth, Ben Affleck, and Judi Dench.

Meet William Shakespeare (Fiennes), an aspiring playwright who can't find the inspiration to write another Screwball Comedy and works for a theater strapped for money. In the bed of his mistress Rosaline, he tries to find inspiration for a comedy titled Romeo and Ethel the Pirate's Daughter. Meanwhile, Viola De Lesseps (Paltrow), a noblewoman engaged to marry an entrepreneur in the Americas, dreams of the stage but is frustrated, because women are banned from the boards. However, she goes out to audition anyway, dressed up as a boy, and is astounded when she gets the part... of Romeo. Tension soon erupts between her and the suddenly single Will, and hilarity, angst, secrecy, and a little sex ensue.

The film is most noted nowadays for its performance at the 1999 Academy Awards, where Paltrow won Best Actress over frontrunner Cate Blanchett (Elizabeth), and the film far more notoriously won Best Picture over the universal critical darling Saving Private Ryan. To some, the latter outcome is one of the greatest award snubs in film history; to others, it's a blessed relief from the Academy's usual insistence that True Art Is Angsty.