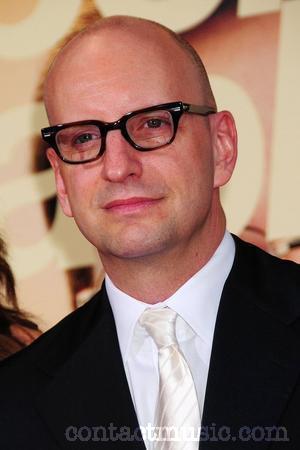 "It would be bad enough if Soderbergh merely wrote, directed, and/or produced a nonstop barrage of provocative, eclectic films and television shows. But that isn’t enough for our greedy little friend. No, he has to shoot his own films and edit them under pseudonyms. Quite frankly, I find it a little sickening that one bald, bespectacled little man is able to do so many things so brilliantly. It isn’t fair. Soderbergh is throwing off the curve. Maybe the reason Hollywood is filled with so many mouth-breathing troglodytes is because he’s hogged all the talent. Either he’s one of the most remarkable talents in American film, or there’s a very busy genie out there granting all his wishes. Alternately, he’s cloned himself Multiplicity style, and has six or seven exact copies helping him get shit done."
— Nathan Rabin, My Year of Flops #141, Solaris (2002)
Advertisement:

Steven Andrew Soderbergh (born January 14, 1963) is an Academy Award-winning film director and producer. He also acts as a writer, cinematographer, and editor on most of his pictures, almost always under a pseudonym.

He is best known for being extremely prolific compared to his peers, going back and forth from making low budget indie films to large budget crowd pleasers, as well as making his movies very quickly and under budget. He's also a major proponent of digital filmmaking.

He claimed in 2013 that his cinematic career was at an end and planned on retiring from filmmaking in the near future, with his apparent swan song being his long-in-gestation Biopic of Liberace, Behind the Candelabra. He does still plan on directing theater and television the first of which being The Knick, later acted as cinematographer and editor on Magic Mike XXL, and fully moved back into feature film directing with Logan Lucky.

Films directed by him include:

Tropes applying to his work: