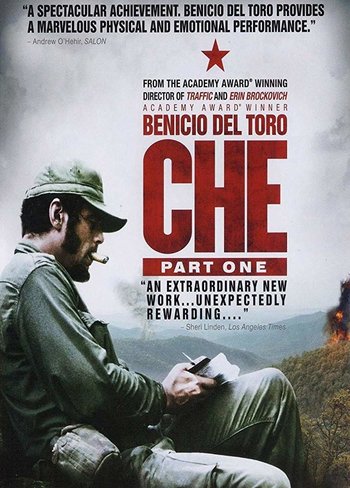 Che is a 2008 film directed by Steven Soderbergh about the life of Ernesto "Che" Guevara, based on his memoirs. It stars Benicio del Toro as Che, alongside Demián Bichir as Fidel Castro, Rodrigo Santoro as Raul Castro, and many others.

The film is divided into two parts. The first covers the entirety of the Cuban Revolution, from Che's first meeting with Castro in exile in Mexico, to Batista fleeing Havana. This is inter-cut and framed by Che's time in New York surrounding his 1964 speech at the United Nations, with specific attention given to his interview with Lisa Howard.

The second part covers the last year of Che's life, as he attempts to start another revolution in Bolivia.

The film premiered at Cannes, where del Toro received the award for best actor.