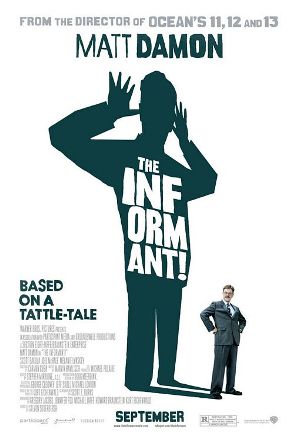 "While this motion picture is based on real events, certain incidents and characters are composites, and dialogue has been dramatized. So there."
— Opening disclaimer
Advertisement:

The Informant! is a 2009 movie directed by Steven Soderbergh and starring Matt Damon. It is Based on a True Story first described by journalist Kurt Eichenwald in his 2000 nonfiction book of the same title.

The movie concerns itself with Mark Whitacre (Damon), an employee of Archer-Daniels-Midland, a food production company. A probe into a possible sabotage turns Mark into a whistleblower for the FBI, as part of a multi-year investigation into worldwide price fixing. But Mark himself is hiding a couple of shocking secrets as well...

Unlike most films about this subject matter that are inspired by a true story, this is Played for Laughs. Mostly. So there.

It's also notable for featuring Marvin Hamlisch's last theatrical film score before his death in 2012.