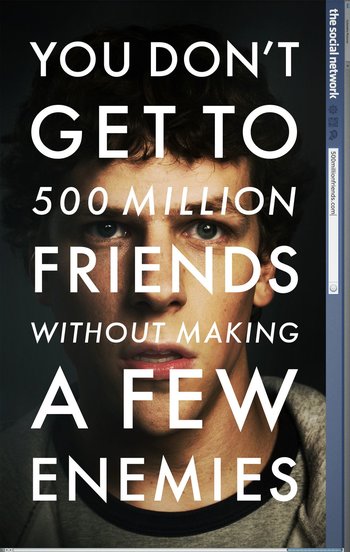 The face that started it all...
"You are probably going to be a very successful computer person. But you're going to go through life thinking that girls don't like you because you're a nerd. And I want you to know, from the bottom of my heart, that that won't be true. It'll be because you're an asshole."
— Erica Albright to Mark Zuckerberg
Advertisement:

The Social Network is a 2010 film directed by David Fincher and written by Aaron Sorkin. Adapted from Ben Mezrich's 2009 book The Accidental Billionaires, it tells the story (largely in flashback) of the founding of the phenomenally successful friending network Facebook and the rise of its founder, Mark Zuckerberg, to the status of the youngest billionaire in history (with some artistic liberties).

The film stars Jesse Eisenberg as Mark Zuckerberg and Andrew Garfield as Eduardo Saverin (a Facebook co-founder and friend of Mark's), with a stacked supporting cast including Armie Hammer, Justin Timberlake, Max Minghella, Rooney Mara, Rashida Jones, Brenda Song and Dakota Johnson. None of the Facebook staff, including Mark, were involved with the project, although Eduardo Saverin was a consultant for Mezrich's book.

In the fall of 2003 at Harvard, a 19-year-old Mark develops a student "hotness" rating website (using illegally obtained pictures) that becomes so popular that it crashes the school's servers. His resulting publicity catches the attention of twin brothers Cameron and Tyler Winklevoss (both played by Hammernote The effect was achieved through a mix of split-screen photography and Hammer acting alongside body double Josh Pence, whose face was then changed to Hammer's in post via Digital Head Swap), who conscribe him to develop a Harvard-exclusive networking website. Mark takes that idea and works out a related networking website with his close friend Eduardo, who fronts the money for the start-up costs.

"The Facebook" becomes an instant hit, with neither Mark nor Eduardo knowing exactly where to go from there. Along comes Napster legend Sean Parker (Timberlake), who wiggles himself into the business and outlines how big this project is going to end up. Mark is enraptured by Parker's vision, but Eduardo is constantly worried that Parker is leading his friend and their company in the wrong direction. On another front, the Winklevoss twins are enraged that Mark effectively "stole" their idea, and begin a legal pursuit of him which raises the questions of how closely The Facebook matches their original idea and the validity of intellectual property.

For its examination of the alienating price of fame and success, The Social Network has frequently been called "the Citizen Kane of the 21st century". It further tackles the question of what it really means to be "connected" (or rather disconnected) in modern society in a way that has helped the film simultaneously capture the spirit of the time it was made and only become more relevant as Facebook has continued to grow (although Fincher sees it more as a Black Sheep Hit).

"You're not an asshole, Mark. You're just trying so hard to be."
Feedback

An intense scene in the film where Zuckerberg responds to the lawyers condescending question with some brutal honesty.

An intense scene in the film where Zuckerberg responds to the lawyers condescending question with some brutal honesty.