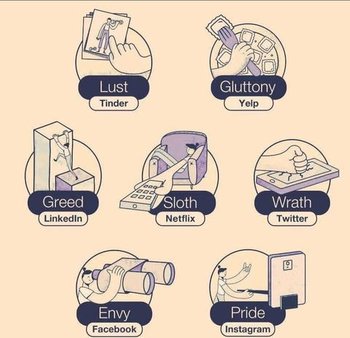 Because nothing says greed like looking for a job.
"Social media isn't a tool that's just waiting to be used. It has its own goals and it has its own means of pursuing them by using your psychology against you."
— Tristan Harris, The Social Dilemma
Advertisement:

Most people with Internet access are on at least one social network, and people who spend an inordinate amount of time scrolling through sites like Facebook or Twitter are not uncommon. Because of its ubiquity, social media is an easy and frequent target of New Media Are Evil. Works employing this trope will portray the use of such websites as overall bad for its individual users or society as a whole, often by portraying its users as obsessed by how they are seen online and by other people taking advantage of this.

This can be played in a few ways:

There is some Truth in Television to this notion: excessive social media use has been correlated with mental illnesses such as depression and anxiety. This trope goes hand-in-hand with An Aesop about how one needs to disconnect every once in a while and not let social media rule their lives. It can also suggest that social media can never be a true substitute for genuine human relationships or communication and that people should be careful about who they interact with on the internet. Some works will go with a more balanced view; while too much of it is detrimental, social media can also be an avenue for good deeds and heartwarming moments.

Subtrope of New Media Are Evil and New Technology is Evil, and supertrope to Social Media Before Reason. Compare Instant Humiliation: Just Add YouTube!, if viral videos are portrayed in a negative light, and Dating Service Disaster if the focus is on dating sites such as Tinder. Can overlap with tropes like Acquired Situational Narcissism and Social Climber if the story focuses on an individual, and such apps may be run by less-than-moral Tech Bros. Shallow News Site Satire and Bad Influencer are related tropes. Internet Safety Aesop is associated with this since it teaches users how to be safe online and how to maintain your privacy.