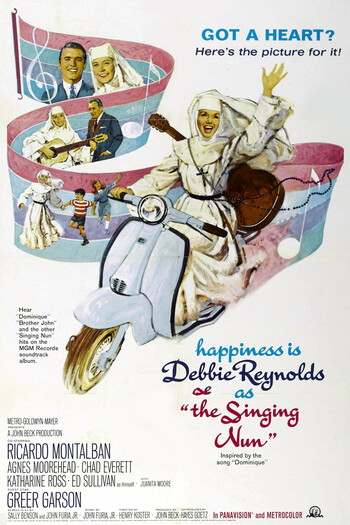 The Singing Nun is a 1966 American semi-biographical film directed by Henry Koster, about the life of Jeanine Deckers (aka Sœur Sourire lit. Sister Smile/"The Singing Nun" in the West), a Belgian nun who in 1963 recorded the chart-topping hit song, "Dominique". Debbie Reynolds stars in the title role as the nun named Sister Ann,* not the real Singing Nun's name with a supporting cast including Ricardo Montalbán, Greer Garson, and Agnes Moorehead. Ed Sullivan appears as himself in a scene where the Singing Nun appears on his TV show. Original songs by the Singing Nun were translated into English and were written by Randy Sparks.

Despite the film being labeled as semi-biographical, Jeanine Deckers herself rejected the film as "fiction", and her actual life was not quite as joyful as how the film portrayed it.

Compare Sister Act if you want a movie with lots of music that also involves nuns but funnier and quirkier.