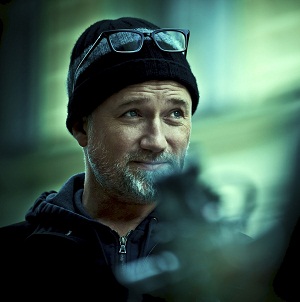 "I don't know how much movies should entertain. To me, I'm always interested in movies that scar. The thing I love about Jaws is the fact that I've never gone swimming in the ocean again."
Advertisement:

After a brief stint working at Industrial Light & Magic on a few films (specifically Return of the Jedi and Indiana Jones and the Temple of Doom), he started out directing commercials and music videos, most notably "Vogue" by Madonna. His movies tend to be very dark, both visually and thematically, and to evoke sensations of paranoia and claustrophobia. He is best known for Se7en, Fight Club, The Social Network and Gone Girl. He was also a producer on the Netflix anthology Love, Death & Robots.

Notable tropes in David Fincher's career and films include: