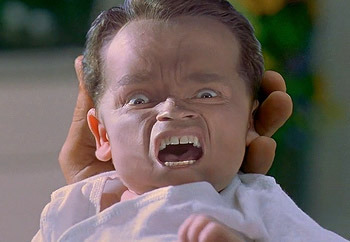 Relatively recent among filmmaking effects because it's very difficult to do without CGI, this is a technique that makes it possible for an actor to be uninhibited by the limitations of his body type. It's mostly used for comedic purposes, creating a sort of Mix-and-Match Critter situation with a man's head on a woman's body, or something similarly ridiculous. Also popular is the method of putting a real face on an otherwise CGI character or vice versa. It can also be done to hide the use of stunt doubles or just to fix a shot in which someone's face is obscured or otherwise not ideal for the film. Digital Deaging is a similar effect in which an actor's own face is made to look younger, which can be applied along with a head-swap.

Done poorly, especially in early cases when the technique was not perfected, this can easily dip into the Uncanny Valley, although this effect can also be invoked on purpose.

Nothing to do with Head Swap, which is a Video Game technique to increase the number of characters by reusing the same body.