A Homeowner Is You 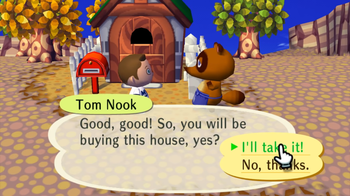 Some games offer you the option to buy a house. That is, if they don't force you to buy one outright, although, in those cases, they're usually "kind" enough to let you choose where and how your house should be.

This may act as a free Inn, give you a place to store stuff, or just be a Bragging Rights Reward. It rarely has a major impact on the gameplay (but may be a big pull for certain types of players, depending on the level of An Interior Designer Is You).