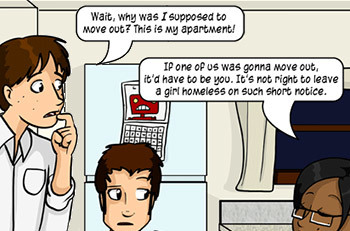 Father: Get out of my house!
Son: But this is my house, father.
Father: Then get out of your house!
— Traditional joke
Advertisement:

A character angrily orders someone to leave the house, only to be reminded that the house they're in belongs to the other person. Alternately, a character announces that they are leaving, and either before reaching the door or (more often) after leaving and coming back through the door says something to the effect of, "Wait a minute. This is my house." (Sometimes followed up by some variation on "You guys get out!")

Compare The Exit Is That Way. Unrelated to a certain jerky doctor. For broader examples of evictions, see Forced from Their Home.