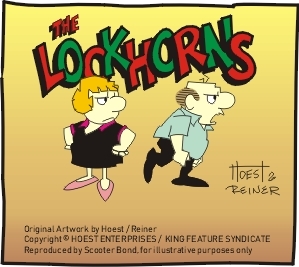 "I don't need TV Tropes to ruin my life! That's what I've got you for!"
Advertisement:

A one-panel, gag-a-day Newspaper Comic created in 1968 by Bill Hoest, continued since his death in 1988 by Bunny Hoest and John Reiner.

The comic's protagonists are Leroy and Loretta Lockhorn, a married couple who hate each other.

That's pretty much all there is to it. The strips usually feature Leroy and Loretta making passive-aggressive, sarcastic one-liners at each other, whether to the other's face or to some third party, though light satire of everyday life also abounds.

This comic features tropes such as: