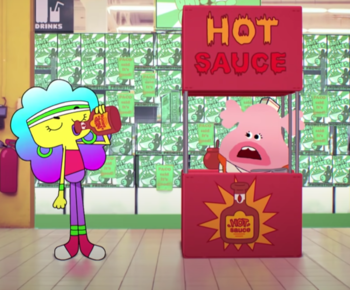 Jackie just won the mom-off...note Or she would have, had she not swapped the bottle with ketchup.
Advertisement:

A gag where a character drinks hot sauce without realizing that they are, mistaking it for something else or being forced to.

Or, alternatively, a character having Bizarre Taste in Food and using it as a condiment, often adding much too much, much to the disgust of the other people.

Or, alternatively again, a character drinking it deliberately as a display of his toughness/manliness.

This is a Comedy Trope. May result in a Fire-Breathing Diner. May instead reveal that the drinker is Unaffected by Spice.