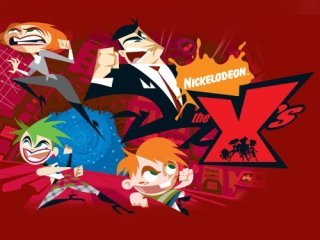 Meet Mr. X, leader and father.
Mrs. X, combat specialist and mother.
Tuesday X, team investigator and daughter.
Truman X, technology expert and son!
Together they form the world's first ultra-secret spy family!
They work for SUPERIOR!
Their nemesis? SNAFU, led by the evil Glowface.
My name is Home Base — I'm the house they live in.
And this is... The X's!
— Opening narration from Home Base
Advertisement:

The X's was a short-lived Nicktoon created by Carlos Ramos that aired on Nickelodeon from 2005 to 2006. It is about a family of spies, who must hide their identity from the outside world, but sometimes have a little trouble in doing so.

The X's work for SUPERIOR. The X's have a young boy named Truman, a teenage girl named Tuesday, and many gadgets at their disposal. An organization called S.N.A.F.U. (Society of Nefarious and Felonious Undertakings) is continually trying to cause trouble for the X's in their plans to take over the world.

The family is often compared to the Pixar's Incredibles.