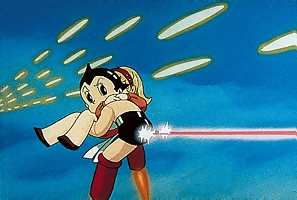 Exactly What It Says on the Tin; a ranged weapon integrated within the character's buttocks. Often used as a surprise attack.

See also Ass Kicks You, Tail Slap, Beware My Stinger Tail. Not to be confused with Fartillery. Subtrope of Joke of the Butt