Film / Three Days of the Condor 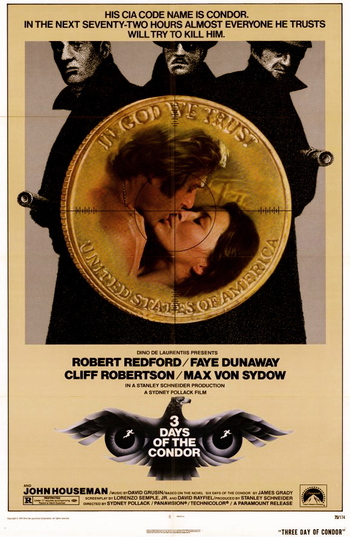 "What if there's a CIA within the CIA?"
— Turner
Advertisement:

Mild-mannered researcher Joe Turner (Redford) works for the Central Intelligence Agency in a small building in New York City, reading book after book to review their plots to see if they either contain elements that may be similar to ongoing covert operations or else be useful ideas for the CIA to employ. One day during the holiday season, Turner steps out of the office to grab some lunch at a nearby deli. While he's gone, a hit squad led by Joubert (von Sydow) enters the office and kills Turner's co-workers (including love interest Janice). Terrified, Turner calls in the deaths to his CIA handlers, who prompt him for his codename 'Condor' and order him to follow procedures for pick-up and debriefing. In the process, things keep getting messier and Turner begins to worry that his own employer the CIA is trying to murder him.

After a botched pick-up gets his last friend in the CIA killed, Turner is forced to kidnap Kathy Hale (Dunaway) and use her apartment as a hideout. At first afraid for her life, Hale rather quickly falls for Turner and they sleep together. With Kathy's help, Turner is able to capture CIA honcho Higgins (Robertson), who reveals he himself is in the dark and wants Turner to stay "on the outside" to draw out the assassins, so the CIA can figure out who's rotten within their own ranks. Now all Turner has to do is survive Joubert's attempts on his life, keep Kathy safe, and figure out why someone in the CIA wants him dead...

A TV remake, known as Condor, is currently airing on Audience.

Three Days of the Condor contains examples of: