Forgot to Mind Their Head 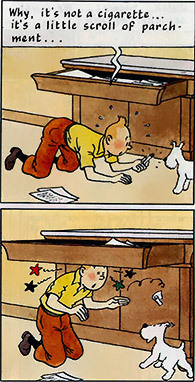 Somebody is working with their head under an object or in a confined space, and they forget where they are. Perhaps they're concentrating on the task at hand, or they're distracted by something else. Then something (often a ringing phone or another person) catches their attention, and they straighten up abruptly, hitting their head. It's a bit like a pratfall on the other end of the body, or a static version of the Low Clearance gag.

Generally, this is Played for Laughs, so the person has a Hard Head and suffers no serious physical injury, though they are quite likely to be sore, flustered or embarrassed. As a result, the person may scold the person who interrupted them, or yell at the ringing phone before answering it. This may also be one way to illustrate that the character is a klutz. On the other hand, the gag may be a way to draw attention to whatever was done or said to cause the person to react this way, or to punctuate the person's surprise.

Common sites for this gag are under furniture or inside a cabinet (say, under the sink in a kitchen or bathroom) and under the open hood/bonnet/trunk lid of a vehicle. May prompt a verbal reaction referring to their new headache. Subtrope to Slapstick and Reaction Shot.