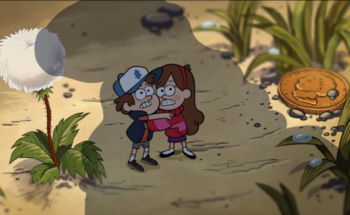 Chief Wiggum: There are ghost cars all over these highways!
Homer: Hold me...
Chief Wiggum: Only if you'll hold me.
— The Simpsons, "Marge on the Lam"
Advertisement:

What better response than to grab a hold of someone bigger and stronger than you to protect you?

The original version has a woman glomping a man in fright, and it's Truth in Television; why do you think guys want to take their girlfriends into Haunted Houses or to horror flicks? Heck, why do girls want to go to haunted houses or horror flicks with their boyfriends? They want to invoke this trope. Also a way to Ship Tease and play up Will They or Won't They? and get some Ho Yay in for characters of the same sex. Occasionally both characters are scared and cling to each other.

A common variation is to have a larger, stronger character hold on to a weaker, smaller character (the man is scared and wants the girl to protect him) or for the braggart who claimed to be brave to be the more terrified.

Another variant is a child hiding behind a teenager or adult and peeking around their leg fearfully/suspiciously. This last one is played more for adorable factor than Fanservice.

Sometimes, an impending danger will approach and disturb fighting/arguing characters into hugging each other in fear. Bonus points if the characters were mortal enemies or are normally very tough and fearless.

In extreme cases, the scared person will leap into the other person's arms or onto their back (usually catching them by surprise). Going in the other direction, a more restrained form of this might have the fearful person reach out and hold tightly onto the sleeve of their companion. A Clingy Child might do this all the time with their parents or any other older figure.

Cry into Chest is a sister trope. Depending on the situation, it can result in Instant Seiza.

Examples of a simple glomp (they grab onto the person):

Examples of leaping into another person's arms (or on their back):

The most impressive fart to emerge from Mr. Rude's ass.

The most impressive fart to emerge from Mr. Rude's ass.