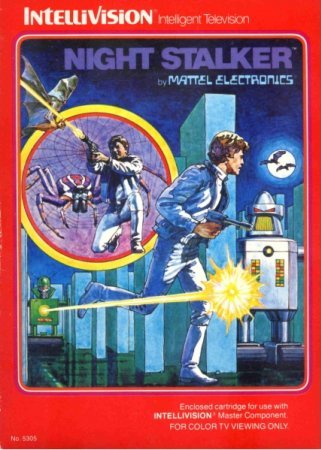 Night Stalker is a 1982 game created and published by Mattel Electronics for the Intellivision, the Aquarius Home Computer, the Apple ][, and the IBM Personal Computer. An Atari 2600 version of the game called Dark Cavern, featuring somewhat different gameplay, was published around the same time period, and years later a homebrew remake called Dungeon Stalker was created and published for the Atari 7800. A demo of a modern remake for the Intellivision Amico has been posted

In the game, you play a man trapped in a hedgerow maze full of killer robots, bats, and spiders. The robots will attempt to exterminate you with their shots, while the bats and spiders can immobilize you upon contact. Your only shelter is a bunker in the center of the maze, but as the bunker has only one exit, you must be careful not to be trapped by the patrolling robots. Your only defense is a randomly-spawning gun that has limited ammunition, which fires up to six bullets before it runs out, forcing you to find another gun. There is no goal but to survive (and score) as long as possible.