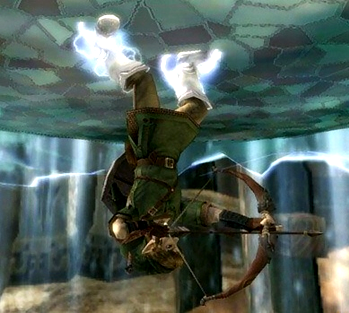 Footwear that sticks to sheer surfaces, either for a Wall Crawl or to substitute for a lack of Artificial Gravity. Magnetized shoes are popular, but you might also see adhesives or even suction cups, in more fantastic settings it might work by portable gravity manipulation if not outright magic.

Don't Try This at Home, you'd need significant leg and core body strength to pull this off and there's very few adhesive materials or devices that can hold the weight of a human body with that little surface area while also allowing them to detach at will. The "gravity boots" variant is somewhat more plausible as the wearer isn't fighting gravity but real life astronauts tend to prefer floating around the interior of their cramped ships and using Jet Packs outside the ship.