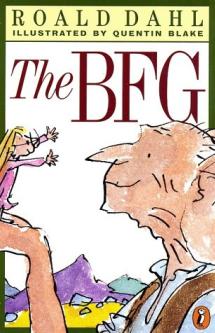 "I is not like the others, I is a nice Giant, I is a freaky Giant. I is the Big Friendly Giant. The BFG, that's me."
Advertisement:

NO! Not that kind of BFG! Not to be confused with The Notorious B.I.G. either. The BFG is a book by Roald Dahl. "BFG" in this case stands for Big Friendly Giant, and is the name of one of the protagonists. He is a Giant, the magic mythological kind who lives in Giant Country and is the only member of his race who doesn't eat humans. The other protagonist is Sophie, a little orphan girl who the BFG kidnaps (an action he later regrets) because she catches a glimpse of him for fear that she will tell the outside world of his presence— she's terrified at first, but, once she learns he's nice, she's actually quite glad to be out of the horrible orphanage she lived in.

The other nine Giants are child killers, and downright terrifying. Sophie is very nearly eaten by one (the Bloodbottler) but survives when he spits out the disgusting vegetable she's hiding in. The BFG lets Sophie in on his secret job — catching dreams from Dream Country, then mixing them up and distributing them to children (blowing them through a big trumpet). He also locks away any nightmares he finds, to make sure they don't find a way to kids by themselves.

Sophie comes up with a plan to capture the other giants: Making the Queen of England dream about the Giants and also that they can be stopped by a little girl called Sophie and a friendly Giant. Thus, when she appears on the Queen's windowsill, Sophie is instantly believed (with the additional backup of a recent ring of child massacres that the Queen also dreams about on the same night that they happen). The Queen calls on the Army and the RAF to capture the Giants, which they do with the help of the BFG and Sophie.