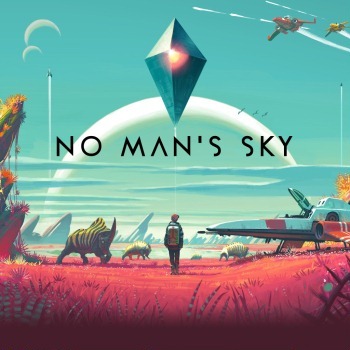 Every planet procedural. Every planet unique. Every planet unexplored.
"I've seen things...a few things before. Left the sun and moon behind. Galaxies waiting to be found. Planets...rich in resources. Battles to be fought. Treasures unknown. A universe...you wouldn't believe".
— "I've Seen Things" trailer

Imagine being on an alien planet in a science fiction Video Game, gazing out into the Alien Sky above, then hopping into your small fighter and going out to explore the other planets in that bizarre, unknown sky. That is No Man's Sky, a Survival Sandbox Elite-like from Hello Games that was initially released in August 2016 for PlayStation 4 and the PC, and in July 2018 for the Xbox One. The Xbox One release was tied with the release of the NEXT update in July 2018, which introduced so many changes and enhancements it was considered by many news outlets as an outright relaunch and many even ended up reviewing the game again. Following those releases, the game was updated to take advantage of the next generation of consoles, the PlayStation 5 and Xbox Series X|S, day and date on the consoles' November 2020 launch. Then it is set to be available on-the-go with a Nintendo Switch version, slated for sometime in the middle of 2022.

There is a heavy emphasis on exploration and discovery where players are able to get into a ship, take off of one planet, and then go and explore other procedurally generated planets in that system and the Galaxy. The player seeks to discover strange new life, valuable resources that can be used to upgrade one's ship, tools, and EV Suit, relics of civilisations long gone, all layered on top of the game's goal to get to the centre of the Galaxy, where an ominous-looking Black Hole lies.

There's also a large emphasis on survival: if you don't upgrade your ship, tools, or suit you could very well end up dead since everything from interstellar pirates to rampaging wildlife can very well kill you, up to and including a bunch of planetary preservation robots called The Sentinels.

It also features music by 65daysofstatic.

The biggest selling point of No Man's Sky is its massive number of procedurally-generated planets, the maximum number of which possible is 72,057,594,037,927,936 (or 2^56, the number 2 to the 56th power) spreading across 255 galaxiesnote the galaxy seed would have allowed 256 galaxies, but seed 0 was not used. More info here

. Even at a discovery rate of two planets per second, it would take over 1.1 billion years to discover all those planets. By then

, the Sun would be 10% brighter than it is today, becoming hotter, with the Earth turning into a sauna as a result.

Man cannot discover new oceans unless he has the courage to lose sight of the shore.
— Andre Gide