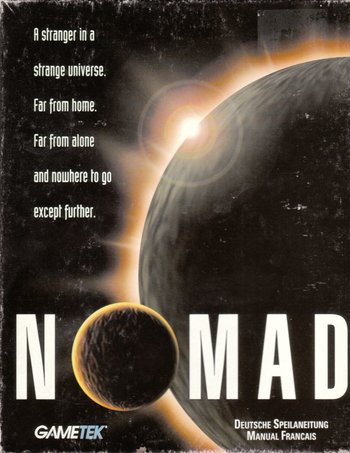 Box art for European distribution
Nomad (1993) is a Wide-Open Sandbox DOS game developed by Papyrus Design Group and Intense! Interactive, and published by GameTek. The player takes the role of a human starship pilot (and Crew of One) who is recruited by benevolent alien races to aid them in the fight against the Korok, who are a Killer Robot race of war machines. The friendly alien species include the Arden, Chanticleer, Musin, Pahrump, and Ursor, with supporting roles in the story filled by the Phelonese, Shaasa, Bellicosian, Kenelm, and Altec Hocker. Most of these fall into the category of Humanoid Aliens, and essentially all of them think that humans look strange.
Advertisement:

The game engine renders with a Sprite/Polygon Mix.