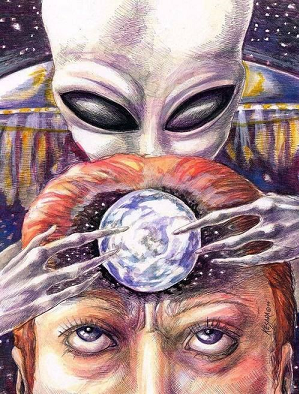 "We need no language. We can project our thoughts long distances."
— Alpha, Catwomen Of The Moon
Advertisement:

Space travelers and extraterrestrials are often telepathic. This has two advantages: 1) We assume they can "think" to others in a way that the recipients' minds will translate into their own language, an elegant version of Translator Microbes for communicating with people from different planets. 2) By some absurd Applied Phlebotinum it is assumed that telepathic communication is instantaneous anywhere in the universe, allowing instant communication across the light-years.

In many far-future science fiction stories, movies and games, it is assumed that human evolution will eventually result in the development of Psychic Powers for the entire human race. As most of those same stories involve space travel, this could be interpreted as humanity becoming the telepathic spacemen.