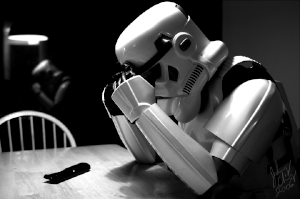 Those were the droids he was looking for.
"Watson, if it should ever strike you that I am getting a little over-confident in my powers, or giving less pains to a case than it deserves, kindly whisper 'Norbury' in my ear, and I shall be infinitely obliged to you."
— Sherlock Holmes, The Yellow Face
Advertisement:

Nothing defines a hero better than his morals, and the biggest sympathy point can be guilt over some monumental screw-up that taught the hero to buckle down and stop taking his job too lightly. This is sometimes related to the origin of a Superhero, but has more impact when the hero's career has otherwise been going well for a while.

From a philosophical standpoint, this makes sense — if someone wins all the time, as heroes tend to do, they would be more defined by their failures than their successes. In Marvel Comics, this is sometimes a consistent psychological flaw (the "Marvel Flaw") which occasionally prevents a hero from succeeding.

The hero will often declare "It's All My Fault" while their friends and family say "You Did Everything You Could."

The hero may recover from this and when they do, it's usually a sign they have grown, although retcons can cause an unpleasant return to status quo.

The Failure Knight has this as part of his backstory to explain why he is so devoted to his new charge. Often produces a combination of Past Experience Nightmares and Anxiety Dreams.

See I Let Gwen Stacy Die for one of the most common failures. Might result in We Used to Be Friends. Often happens to heroes who fail to make amends. Can be a Career-Building Blunder. When the failure is what put the character on the path to being the current (better) person s/he is now, it's Necessary Fail. If the plot brings about an opportunity to correct or make up for their failure, you have My Greatest Second Chance. If failure puts the hero in a funk that takes years to shake off then you have a Scrap Heap Hero. For Real Life examples from creators, see Old Shame.