My New Gift Is Lame 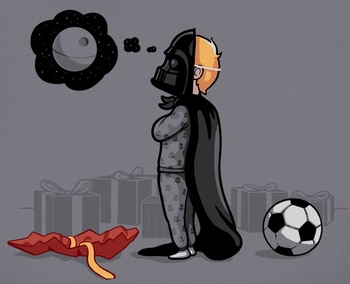 "I find my lack of Death Star disturbing."
Image

"First night, you get socks. Second night, an eraser, a notebook. We took the marvelous festival of giving that is Christmas and turned it into a Back-to-School holiday!"
— Lewis Black on Hanukkah
Advertisement:

Whenever someone is handing out gifts to a group of people, one of them is going to be massively disappointed.

Typically, almost everyone gets a really spectacular gift that is exactly what they wanted. Except for this one sap who gets, say, a nickel.

The jilted character will feign delight, but as they watch the others enjoy their gifts, their annoyance will grow until they finally explode at the gift-giver. This character might also have to write a note saying 'thanks' despite not feeling thankful at all.

Typically, it will turn out that the gift has some great hidden value, and that their gift has really been the best gift of all, just not in any obvious way. Like the nickel is a rare coin worth millions.

Sometimes, the lame gift is just something of great sentimental value to the giver, in which case it reflects deep affection and is a very touching gift, though it's still a bit lame- see Crappy Homemade Gift.

Sometimes, the universe just hates them.

For the superhero version of this, see Blessed with Suck. Kids Prefer Boxes is a juvenile variation of this trope. I Got a Rock is the trick-or-treating version. When Elemental Powers are in play, you'll have What Kind of Lame Power Is Heart, Anyway? May result from Convenience Store Gift Shopping or a Homemade Sweater from Hell. The subtrope that drives the engine of an Unwanted Gift Plot. For the polar opposite of this trope (where the character finds an item most people would consider cool to be lame), see Worthless Yellow Rocks.

Of course it's possible that It May Help You on Your Quest.