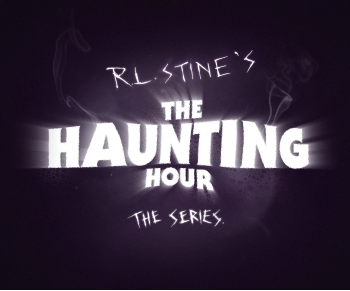 R. L. Stine's The Haunting Hour: The Series is a horror series that aired on The Hub (now called Discovery Family). Like the TV adaptation of Goosebumps and the short-lived series, The Nightmare Room, it is a horror Genre Anthology series featuring a different story every week filled with kids facing off against ghosts, monsters, and other supernatural beings...
Advertisement:

Compared to Goosebumps, the stories are much, much darker. There was even a disclaimer about its content before the episodes began! Some of the episodes were adapted from R.L. Stine's works, mainly from the Nightmare Hour and The Haunting Hour short story collections.

After just four seasons on the air, R.L. Stine confirmed that Discovery Family removed the show from their schedule

, making the last season the shortest one with only ten episodes. The last episode aired was the Christmas Episode "Goodwill Toward Men."

Has a Recap page and a wiki

Continuity-wise, it's unrelated to the made-for-TV movie The Haunting Hour: Don't Think About It.