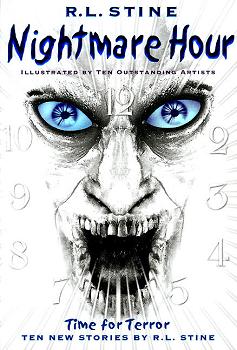 Sounds like a good time to me.
"These are my scariest stories ever," says R.L. Stine, "because I wrote them at the Nightmare Hour." You know when that is...it's when the lights fade, the real world slips into shadow, and the cold, moonlit world of evil dreams takes over your mind."
— Back quote of the book

Nightmare Hour is a 1999 collection of ten short stories by Goosebumps author R. L. Stine. Unlike many of his works, these stories aren't tied to a particular series, but stand on their own as disturbing tales. They range from an encounter with a ghost that wants human skin to a group of suspicious kids arranging an "Alien Club" to spending a night in the hospital on Halloween and being mistaken for an amputation patient.