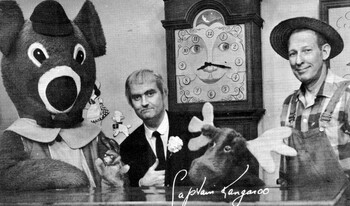 The cast circa 1961. Left to right: Dancing Bear, Bunny Rabbit, Captain Kangaroo, Grandfather Clock, Mister Moose, and Mister Green Jeans.
"Countin' flowers on the wall, that don't bother me at all
Playin' solitaire 'til dawn, with a deck of fifty-one
Smokin' cigarettes and watchin' Captain Kangaroo
Now don't tell me I've nothin' to do"
— The Statler Brothers, "Flowers on the Wall"
Advertisement:

Captain Kangaroo is a children's television series created and hosted by Bob Keeshan. It ran weekday mornings on CBS from 1955 to 1984. The name "Captain Kangaroo" came from the large pockets in Keeshan's signature red jacket. After the show left CBS, it ran until 1990 on PBS.

Keeshan's supporting cast included Dennis the painter, played by Cosmo Allegretti, and Mr. Green Jeans, a farmer played by Hugh "Lumpy" Brannum. Allegretti also operated the puppets Mr. Moose and Bunny Rabbit. Other recurring characters included the Town Clown, the Dancing Bear and Fred from Channel One. The show also had animated segments, including Tom Terrific and Lariat Sam from Terrytoons, Crystal Tipps and Alistair from The BBC, and CB Bears from Hanna-Barbera.

A syndicated revival of Captain Kangaroo was attempted in 1997 by Saban Entertainment, with bearded actor John McDonough in a blue jacket, which later aired on Fox Family.