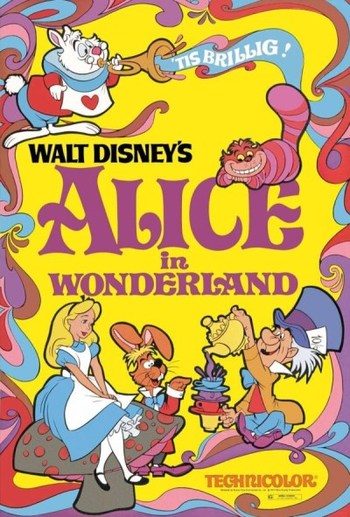 Number 13 in the Disney Animated Canon, this 1951 adaptation of Alice's Adventures in Wonderland was a long time coming. Walt Disney was a lifelong fan of the book and wanted to make it a decade earlier, but another production of the story was being produced elsewhere at the time, prompting the studio to shelve it for a while. Then World War II happened and they lost a lot of their budget on war films. Some years of Development Hell turned the film into a more wacky, comedic, and very odd entry in the Disney canon.

It inspired three attractions in the Disney Theme Parks, most prominent being the famous spinning teacups ride, which each resort has a variation of.note Shanghai Disneyland uses hunny pots instead of teacups. Disneyland also has a conventional dark ride based on the film, and Disneyland Paris has a Wonderland labyrinth. When Slave Labor Graphics had the licenses to produce different Disney comics, they published a sequel miniseries simply titled Wonderland, in which the White Rabbit's unseen maid Mary Ann gets her Day in the Limelight and has to save her boss when he is blamed for being responsible for the havoc Alice wrought on Wonderland.

A Sequel Series to the film aimed at the preschool demographic called Alice's Wonderland Bakery premiered on Disney Channel and Disney Junior on February 9th, 2022. note  Alongside the show's first 7 episodes being available on Disney+.

If you're looking for the 2010 Tim Burton film, also by Disney, visit here.

—Alice in Wonderland
Where is the path to Wonderland?
Over the hill or here or there?
I wonder... where.
Feedback

In the 1951 animated classic "Alice In Wonderland", there are several scenes where the titular heroine ends up eating something that causes her to grow to giant-size.

In the 1951 animated classic "Alice In Wonderland", there are several scenes where the titular heroine ends up eating something that causes her to grow to giant-size.