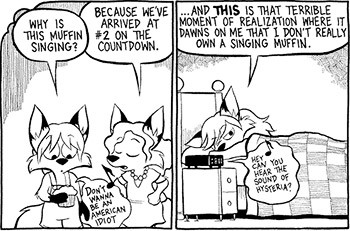 A character is dreaming; they may or may not realize that they are doing so. For once, it is a dream that makes sense, but then there is a sudden non sequitur. The character does a double take and awakens to find the non sequitur reflects what's really happening around them.

Sometimes it's not a non sequitur and makes sense in both the dream and the real world. Or the two things are distinctly connected but not the same exact thing. Common examples include the person's name being repeated over and over again (a person in the real world calling them); a phone call in the dream (which turns out to be an alarm clock); and a passionate kiss (which turns out to be either an animal licking their face or an unappealing friend giving them the Kiss of Life).

Probably everyone can attest that this trope is Truth in Television. May result in I Was Having Such a Nice Dream if the interrupted dream was a particularly pleasant one.

Compare Bedtime Brainwashing (that's a Mind Manipulation trope about manipulation by suggestions given to a sleeping subject, this is about dreams and real life coinciding, like dreaming you're kissing someone while being licked by your dog in real life). Also compare Marshmallow Dream. Contrast Acting Out a Daydream for when a daytime fantasy influences the daydreamer's real life actions.