But You Were There, and You, and You 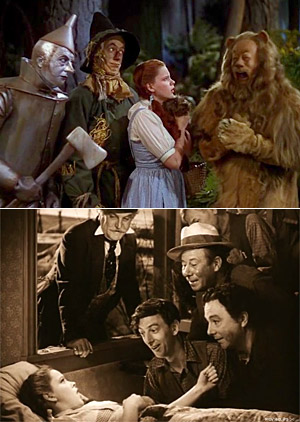 It looks like Dorothy really did know those guys all her life.
Garak: What I find most fascinating about this entire incident is how your unconscious mind chose people you know to represent the various parts of your personality.
Doctor Bashir: Well, it did make things interesting.
Garak: And what I find interesting, is how your mind ended up casting me in the role of the villain.
Doctor Bashir: Oh, I wouldn't read too much into that, Garak.
— Star Trek: Deep Space Nine, "Distant Voices"
Advertisement:

When a character tells a story or has a dream of a completely unrelated event in which people they already know fill in for the roles of the story.

This is something of a Truth in Television because people do tend to have people they know in their dreams. There’s even a theory that all the people in such dreams are like this - it's just that we don't remember them all because some of them are just random people we've briefly seen at some time in our life, such as a stranger on a bus ride.

Subtrope of And You Were There. See also Visions of Another Self and Her Code Name Was "Mary Sue". Frequently overlaps with Whole Plot Reference, especially Off to See the Wizard, which is one of the most famous examples. (And the source of this page’s name, of course.) For when a dream is literally being shared by all the characters, it's a Shared Dream. If someone invokes this in a Ghost Story to scare the listener, it's a Scarily Specific Story, although not all Scarily Specific Stories involve this trope.