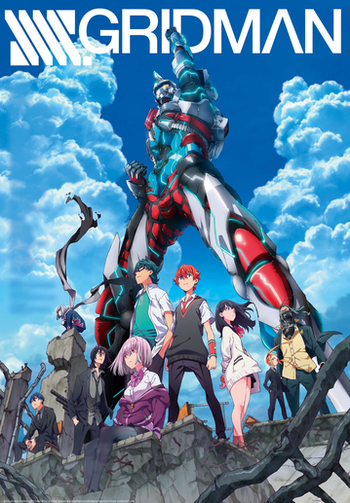 boys reinvent great hero
You have to remember what your calling is.
—Gridman
Advertisement:

SSSS.GRIDMɅNnote Simply pronounced as "Gridman" is the celebration of the 25th anniversary of the original 1993 toku TV series Denkou Choujin Gridman (which came to English-speaking countries by way of Superhuman Samurai Syber-Squad) and is the first animated series of the greater Gridman Universe. The old show was about a group of three kids who had built their own computer named Junk in the dawn of the Internet age and were thrust into the fight between the Hyper Agent Gridman, protector of the Computer World, and the evil Kahn Digifer, a being who brought their classmate's digital kaiju virus creations to life to exact revenge on petty slights against him. Sounds familiar.

A collaboration between Tsuburaya Productions and Studio TRIGGER (with Graphinica handling the CGI), it is a Continuity Rebootnote Sort of... that makes many homages to the original toku (and its American adaptation), and is a Spiritual Successor to Trigger's previous homage to the series, Denkou Choujin Gridman: boys invent great hero for the Japan Animator Expo in 2015. (The show's lead director/animator, Akira Amemiya directed it.)

Yuta Hibiki wakes up in his classmate Rikka Takarada's room having lost his memories. After getting him checked out and having their classmate Sho Utsumi help him out the next day, Yuta is only sure of two things: he can see a bunch of Kaiju hidden in the clouds, and someone calling himself Gridman is talking to him through an old computer in Rikka's mother's junk shop, telling him that he has a mission to complete. That mission, it turns out, is fighting the Kaiju that his classmate Akane Shinjo is sending out to take revenge on people who have slighted her, with the help of her own computer-bound companion Alexis Kerib. With the help of Rikka, Sho, and a group of alleged middle school students wearing business suits, Yuta and Gridman save the city from Akane's Kaiju creations; otherwise, people get written out of history and they're the only ones to know about it.

The English dub of the show premiered on Toonami in January 2021.

here, as well as its announcement

set in the same universe, SSSS.DYNɅZENON, began on April 2, 2021 with most of the same crew returning. On Dec. 13, 2021, Trigger announced its third "GRIDMAN UNIVERSE" entry,