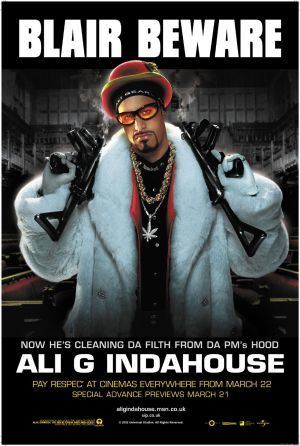 "All you motherfuckers, fuck-fuck-fuck-fuckers!"
Ali G's Cluster F-Bomb opening to his campaign
Advertisement:

In this 2002 film Spin-Off of Da Ali G Show, Sacha Baron Cohen takes his Ali G character to the big screen, though this time the comedy is completely scripted.

Alistair "Ali G" Graham is a middle-class white kid from Staines, a sleepy little suburb, who lives with his grandmother. He spends his time pretending to be a gangsta with a couple other prep-school types from around the neighborhood. He has a running rivalry with the crosstown East Staines Massiv, though all the Staines gangstas are so straight-laced that they won't even exceed the speed limit while street racing. The closest thing Ali G has to a job is volunteering at the town leisure center, teaching kids how to "keep it real" by educating them on gangsta rap cliches. When he learns that the leisure center is about to be closed, he decides to go on a political campaign to keep it open. A nefarious Deputy Prime Minister persuades him to run for MP, and due to a fluke he wins. Ali G gets into a variety of Fish out of Water shenanigans as his horn-dog, pot-smoking personality clashes with the stuffy politicos. Ultimately Ali G must rally all the suburban gangstas to save Britain from the evil Deputy Prime Minister.

The first movie based on Da Ali G Show, Ali G Indahouse was later followed up by Borat and Brüno (2009), which gave the same big screen treatment to Kazakh journalist Borat Sagdiyev and fashion designer Brüno. Interestingly, Indahouse is Baron Cohen's only film to ditch the show's Mockumentary format entirely, incorporating a full cast of fictional characters (and quite a few recognizable actors) to prop up Ali's antics.

In addition to Baron Cohen himself, the cast includes Martin Freeman as Ali's best friend Ricky C, Michael Gambon as the Prime Minister, Charles Dance as his scheming Deputy PM, and Rhona Mitra as the latter's Sexy Secretary.