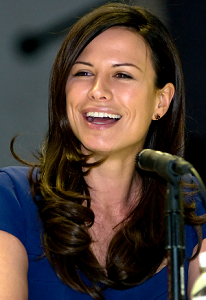 Rhona Natasha Mitra (born 9 August 1976 in Paddington, London), sometimes credited as Rona Mitra, is an English actress, model and singer. Her father is of Indian descent, and her mother's Irish. She came to prominence as the model for the iconic Lara Croft, essentially professionally cosplaying as her. She then broke into film and television with memorable performances in the likes of Nip/Tuck, The Practice and Boston Legal, and she won critical praise for her fierce turn as a bona-fide action heroine in Doomsday (although reception to the film itself was a little more divided). She also starred as Dr. Rachel Scott on The Last Ship.