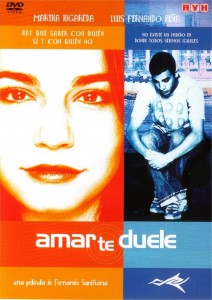 Amar te Duele (Loving You Hurts) is a Mexican film released in 2002.

The film deals with two Mexico City teenagers who fall in love with each other: Renata (Martha Higareda), a rich white girl, and Ulises (Luis Fernando Peña), a poor indigenous boy. Because of their class and racial differences, society will do everything to keep them apart.

The story also depicts how the Mexican upper and lower class interact and their prejudices and discrimination against each other.