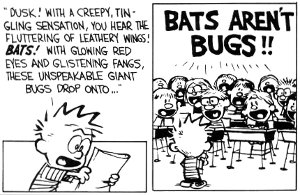 Even (most) first graders know this one.
Russian Ambassador DeSadesky: Our doomsday scheme cost us just a small fraction of what we've been spending on defense in a single year. The deciding factor was when we learned that your country was working on similar lines, and we were afraid of a doomsday gap!
President Muffley: This is preposterous! I have never approved of anything like that!
Ambassador DeSadesky: Our source was The New York Times.
— Dr. Strangelove
Advertisement:

An instance where a character, usually but not always someone who is Book Dumb if not The Ditz, proclaims an incorrect bit of information they learned from a highly questionable source if they researched it at all in the first place. Often, someone else will try to correct them. Almost always this is Played for Laughs. Often overlaps with Epic Fail.

When writers do a Critical Research Failure, the character doesn't just make a factoid error, the other characters either agree with him or even make the same errors as well as if the error is true In-Universe; or, more likely, the narration or in-story lore makes the factoid error. See also Didn't Think This Through, when a plan goes awry from lack of planning. Expect a Know-Nothing Know-It-All to do this often. Future Imperfect is a specific version of this in which people misrepresent past cultures.

Compare Little Known Facts, Eskimos Aren't Real, Gretzky Has the Ball, Don't Be Ridiculous (when attempted correction is more absurd than the original explanation) and The Blind Leading the Blind.

In-Universe, Homer gets a math equation wrong and is corrected by someone.

In-Universe, Homer gets a math equation wrong and is corrected by someone.