Film / The Eagle Has Landed 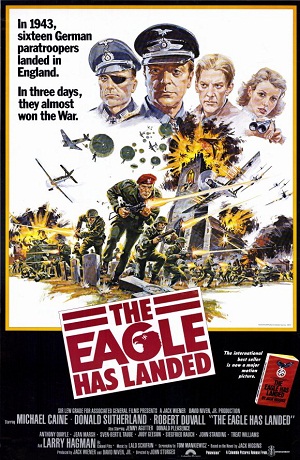 The Eagle Has Landed is a 1976 World War II film directed by John Sturges and based on the novel of the same name by Jack Higgins, detailing a fictional plot to capture or kill Winston Churchill by a group of German commandos.

Michael Caine, Donald Sutherland and Robert Duvall star as, respectively, the leader of the squad, their Irish nationalist liaison, and the German colonel in charge of masterminding the mission. Also in the cast are Jenny Agutter, Donald Pleasence, Jean Marsh, Treat Williams, and Larry Hagman.

The Eagle Has Landed provides examples of: