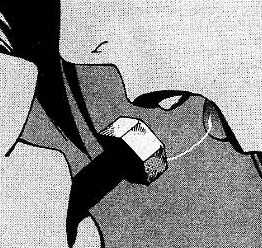 Is that a plot device in your mouth Or Are You Just Happy to See Me?
"Kiss the girl, get the key. They never taught me that in the Obsidian Order."
— Elim Garak, Star Trek: Deep Space Nine, "Our Man Bashir"
Advertisement:

The hero has his back up against the wall. He's tied to the chair blindfolded, the firing squad is taking aim, the shark tank is sliding into position, the laser cannon/deathtrap is warming up, and his last cigarette is already half ash, you know the drill. By all accounts, his pooch is clearly about to be screwed.

And the Mad Scientist's Beautiful Daughter or The Baroness or the Femme Fatale moves in for that last lingering sadistic Last Kiss to resolve that pesky UST...

Cue the Downer Ending, right? Not so much; as it works out, during the kiss she slipped into his mouth the key to his shackles, or a lock pick or the appropriate piece of Phlebotinum, ensuring that our intrepid hero lives on to fight (and kiss) another day.

Compare and contrast Mouth To Mouth Force Feeding, where the kiss is used to force the target to ingest some drug, poison, or other substances that the other would not have voluntarily taken on their own.