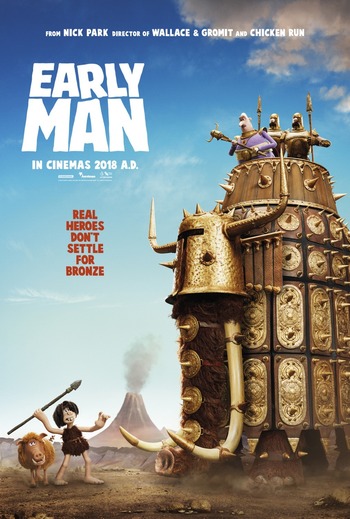 For the record, our hero's the caveman.note If nothing else, he gets an "A" for effort!
"You’re pretty brave, caveman. And stupid. Actually, more stupid than brave, really."
—Goona
Advertisement:

Meet Dug (Redmayne). He's just an eager, go-getting caveman who's enjoying the Stone Age during the Dawn of Time with his best friend boar Hognob and tribe.

But one night, everything comes to a screeching halt when armoured mammoths come out of nowhere and with them, Lord Nooth (Hiddleston), who declares the Stone Age to be done and over with and to make room for the Bronze Age and forces the tribe out of the valley.

Suffice to say, Dug isn't going to take this turn of events sitting down, so he conspires with Hognob and new lady-friend Goona (Williams) to save Dug's tribe in a tale of adventure, excitement, determination, and soccer.

and the full trailer.