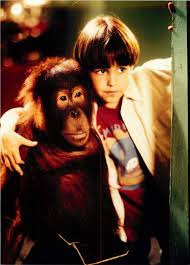 And they say a boy’s best friend is a dog.
“He's about to turn a Five Star Hotel into a three ring circus.”
— Tagline
Advertisement:

As beleaguered manager of the luxurious Majestic Hotel, Robert Grant not only deftly juggles with keeping the hotel in order, but he has to control his troublesome and mischievous sons as he prepares for the hotel's upcoming annual gala. Things get complicated when his snobbish boss Mrs. Dubrow, owner of the establishment, shows up with unwelcome news: A Le Monde travel association undercover as a guest is slated to award a sixth star to the most elite five-star hotels in the world. If Robert does well, he might get promoted and some time off to take his sons on vacation... but if the Majestic Hotel doesn't get the sixth star, he loses his job.

Then jewel thief Lord Rutledge checks into the hotel in hopes of stealing valuables with his specially trained orangutan, Dunston. When Dunston flees his malevolent master, he inevitably causes mayhem wherever he goes. Eventually, he meets Robert's younger son Kyle, with whom he forms a close bond. Unfortunately, things get much more difficult when Robert catches sight of Dunston and calls the determined but inept animal control officer LeFarge to get rid of the orangutan.