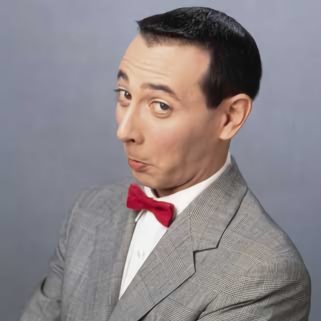 "'Ha ha heh heh heh!"
"I know you are, but what am I?"
"Pee-wee just kind of popped out one day, pretty much fully fleshed-out and fully formed."
Advertisement:

Spending significant amount of his childhood in Oneonta, New York, Reubens visited the Ringling Bros. and Barnum & Bailey Circus, its atmosphere sparking his interest in entertainment and influenced his later work as well as wanting to make people laugh on account of his love of watching I Love Lucy reruns. He joined the local Asolo Theater at the age of eleven, appearing in a variety of plays during the next six years. After graduating from Sarasota High School in 1970, he attended Boston University for a year before seeking his fortune in Hollywood.

In the mid-1970s, Paul Reubens' acting career grew steadily yet slowly with small roles in theater productions, gigs at local comedy clubs and four guest appearances on The Gong Show. During his time of pursuing an acting major at California Institute of the Arts as well as working in a string of pay-the-rent jobs, Reubens joined improvisation comedy troupe called The Groundlings. Among Reubens' contributions to the comedic community were a philandering husband named Moses Feldman, an Indian chief named Jay Longtoe and cult character Pee-wee Herman, who debuted in 1978. Only appearing in ten minutes of The Groundlings as character Pee-Wee Herman, Reubens nonetheless built up a considerable following, turning out to be a star of the '80s, marking his comedic fictional character's first significant appearance on stage show The Pee Wee Herman Show Reubens developed.

Sadly, Reubens' image of Pee-wee Herman was destroyed on July 28, 1991 when he fell victim to a police sting operation while visiting his parents in Sarasota on his summer vacation. Seeking to escape from boredom, Reubens went to catch a showing of X-rated film Nurse Nancy, where he was arrested for sex charges when detectives allegedly saw him playing with his private parts. Released on $219 bail, nobody realized what happened until somebody recognized him beneath his long hair and goatee. As a result, CBS dropped Pee-wee's Playhouse and related merchandise was released from its shelves. Reubens agreed to pay a $50 fine plus $85 in court costs as well as producing a memorably Narmy PSA

for the Partnership for Drug-Free America commercial. As part of the deal, the county sealed all legal papers relating to the actor's arrest, not leaving Reubens with a criminal record.

Despite promising to never reprise his role of Pee-wee Herman after the scandal marked the virtual death of his iconic character, Paul Reubens revived his cult persona in a 2011 theater revival, bringing him full circle to the more adult theme of the original acts.

Though his career may never reach Herman's heights again, Reubens landed in offbeat character roles as well as vocal roles.

Pee-wee got one more big moment in the spotlight in 2016, with the Netflix original film, Pee-wee's Big Holiday.