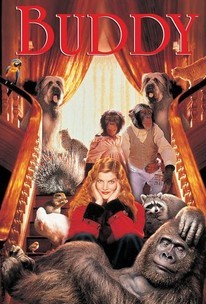 Buddy is a 1997 film produced by Columbia Pictures, the first of three co-productions with the short-lived Jim Henson Pictures.

Trudy is a millionaire that lavishes her wealth on her pets like they're her children. She has an entire family of chimpanzees, dogs, cats, exotic birds, and other creatures. One afternoon while visiting the zoo she comes across an orphaned baby gorilla named "Buddy", just arrived from Africa. Feeling pity for the baby, she takes him with her, and from then on raises Buddy to be her surrogate son that she totes around the city. Buddy grows to hate the confines of the mansion and of the strict rules of human interaction and becomes a dangerously hard to control adult gorilla.