Film / Burnt by the Sun 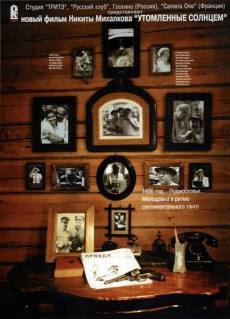 Burnt by the Sun (Утомлённые солнцем) is a 1994 Russian drama directed by Nikita Mikhalkov set in one day in the 1930s, focusing on the effect of the dictatorship of Josef Stalin on a Red Army officer. It won the Oscar for Best Foreign Language Film, one of only four in Russian to do so, the other three being War and Peace, Dersu Uzala, and Moscow Does Not Believe in Tears.

Russia, 1936: revolutionary hero Colonel Kotov (Nikita Mikhailkov) is spending an idyllic summer in his village with his young wife and six-year-old daughter Nadya and other assorted family and friends. Things change dramatically with the unheralded arrival of Cousin Dmitri (Oleg Menshikov) from Moscow, who charms the women and little Nadia with his games and pianistic bravura. But Kotov isn't fooled: this is the time of Stalin's repression, with telephone calls in the middle of the night spelling doom - and he knows that Dmitri isn't paying a social call...

The title derives from a popular 1930s song composed by Jerzy Petersburski. Originally the Polish tango To ostatnia niedziela, it became popular in the Soviet Union with the new Russian lyrics as Утомлённое солнце (Utomlyonnoye solntse, Weary Sun). The song is actually heard repeatedly in the film; director Mikhalkov stated in 2007 that he learned of the song from his elder brother Andrei Konchalovsky's 1979 film Siberiade and jokingly compared this to the fact that, when a boy, he once stole some money from his brother.

The title also refers to a mysterious orb of light, similar to ball lightning, that appears at various points in the film; the film states at the end that it is dedicated to those "burnt by the sun" of the Revolution.

A sequel, a Great Patriotic War film called Burnt by the Sun 2, was filmed and competed for the Palme d'Or at the 2010 Cannes Film Festival. Nikita Mikhalkov directed and reprised his role as Sergei Petrovich Kotov. Oleg Menshikov and Nadezhda Mikhalkova also reprised their roles from the original film. The film is Russian film's industry most expensive failure, having played to empty houses before being withdrawn from circulation. (Part of the problem was the Continuity Snarl the film presented with the first film, with multiple characters that were killed off somehow being alive again, and little Nadya being a good ten years older than she should have been in 1941.)