Film / George of the Jungle 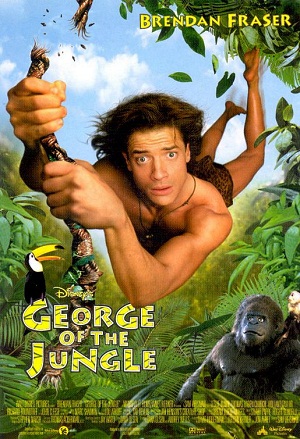 George of the Jungle is a 1997 live-action comedy based on the Tarzan parody cartoon series of the same name, starring Brendan Fraser as George, Leslie Mann as Ursula and John Cleese as the voice of Ape.

We learn in the Animated Credits Opening that George (Fraser) survived a plane crash in the heart of Africa, but was sadly unfound by the survivors and rescue crew. Here, he grows into a man who rules the jungle. An heiress named Ursula Stanhope (Mann) explores the area with her snooty fiance, Lyle (Thomas Haden Church), who abandons her when a lion attacks them. George swoops in to save Ursula, and takes care of her while Lyle and a couple of poachers (in search of the mythical "White Ape", which is George) try to find her. George and Ursula eventually fall in love with each other, and they go back to San Francisco for the requisite Fish out of Water plot. George and Ursula have to deal with the treacherous Lyle and Ursula's disapproving, meddling mother Beatrice (Holland Taylor) in order to stay together and live happily ever after.

Completely light-hearted, with a narrator who delights in the fact there's No Fourth Wall and lampshades just about everything, George of the Jungle was a box-office success and relatively well-received with critics. In 2003 it got a Direct to Video sequel, which had Christopher Showerman as George and Julie Benz as Ursula. ("Me new George. Studio too cheap to pay Brendan Fraser.")

Example of:
My Hovercraft Is Full of Eels