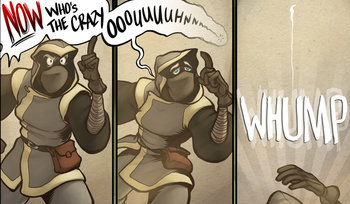 Last Words, but before Instant Sedation rather than dying. Sometimes they possess a bit of the impact of actual Last Words because the fainting character is in bad shape and using the last strength they have to utter them or because their general situation is bad and they don't know if they will wake up again.

In a variant, the person doing the sedating may give a one-liner to the person they have sedated. A brief bit of Snark-to-Snark Combat may ensue, before the drugged party passes out.

If they don't have any meaning, it's Non Sequitur, *Thud*.