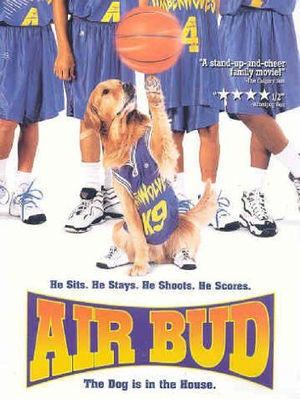 Ah, the story of A Boy And His Dog, what could be more wonderful? Why, making the dog a sports prodigy, of course!

Twelve-year-old Josh Framm (Kevin Zegers) has to deal with moving to a new town while mourning the death of his father. He meets Buddy, a golden retriever who has managed to escape his abusive owner, an alcoholic clown named Norman Snively (Michael Jeter). The pair become friends and eventually, Josh's mother allows the dog to stay. In the process, Josh discovers that Buddy can play basketball, and the pair end up joining the basketball team, with Buddy as the team's mascot. During a televised game, Snively sees Buddy's talent on the court and manages to get him back from the Framms. Josh, however, manages to rescue the dog, and the pair of them get back to the school, just in time for Buddy to win the game, by means of the Animal Athlete Loophole.

The Air Bud series began in 1997, when Air Bud premiered in theaters. It was an huge success and has spawned four direct sequels and a spin-off franchise in the form of the Air Buddies movies, which focus on Bud's puppies.

The Air Bud films each feature Buddy playing a different sport, and follow roughly the same pattern as the original movie: Buddy shows skill at a sport, he is then kidnapped because of his skill at said sport, his family rescues him, and he returns just in time to win the final match for his team.

The Air Buddies films focus on Buddy's puppies and are more family-oriented. They were followed by the Pup Academy series. These spinoffs have different foci and genres.