Film / Up the Creek 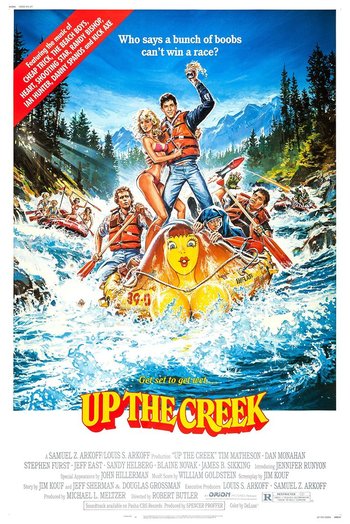 "Who says a bunch of boobs can't win a race?"
Advertisement:

Bob McGraw (Matheson) is in his 12th year of college, a loveable malcontent bouncing from one school to another (currently La Petomane University), coasting by with countless loans and showing no plans of graduating anytime soon... at least, not until he's escorted by campus security — along with his underachieving peers Irwin (Sandy Helberg), Gonzer (Stephen Furst), and Max (Dan Monahan) — to a clandestine meeting with Dean Burch (John Hillerman) one morning at dawn.

Burch bemoans the school's lack of notoriety (apparently no student or alum of La Petomane has ever accomplished anything of note) and cites the four students, the bottom four in the university, as prime examples. He tells them about an upcoming annual intercollegiate raft race and issues an ultimatum: win the race and put the school on the map in exchange for immediate graduation with their degree of choice or lose and face expulsion for poor performance and respective shady dealings.

It's not long before the foursome find themselves on their way to the big race, facing the likes of an unhinged Washington Military Institute squad, a snobbish team from Ivy University with designs to cheat their way to victory, and an all-female co-ed group led by requisite romantic interest Heather Merriweather (Jennifer Runyon). If you expect anything but hilarity to ensue you're probably watching the wrong movie.